Keating Chambers are delighted to confirm a second year of supporting London Pulse, one of the elite netball Superleague teams in the UK. Keating commenced their partnership with London Pulse in July 2020 with a plan to arrange a Corporate Netball Cup at the Copperbox in early 2021. Circumstances in the last year have meant that we were unable to deliver on the Cup but we are looking to reschedule the tournament for early 2022.

In the meantime, we have continued to provide financial support to the club via the provision of funding to support talented athletes who otherwise would not be able to afford to be part of the London Pulse academy programme.

London Pulse recently completed their 2021 season with a series of three back-to-back victories, thereby securing themselves a top 8 league position and the chance to fight it out in the Fast-5s later this year. Following close-fought matches with some of the Top 4 teams, their last game of the season saw a 46:33 win against local rival Saracens Mavericks.

Off the court, Pulse have been positioning themselves as the “beating heart of netball in London”, driving forward with a number of exciting initiatives including:

We are excited to support London Pulse in their 2022 Superleague Campaign and look forward to announcing the date of our Corporate Cup in due course. 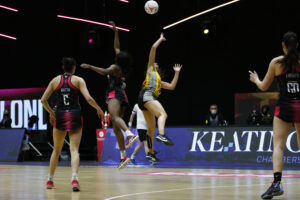