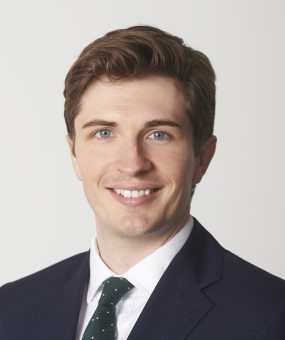 Matthew Finn has specialist expertise in the resolution of high-value, complex commercial disputes, with a principal focus upon disputes arising in the construction, engineering and energy sectors. Matthew is ranked as a leading junior in construction law, with clients commenting:

“He is an excellent junior who punches above his weight. He is very responsive and provides clear and considered advice.” (Chambers & Partners, 2022)

“Extremely intelligent, with mature judgement. He is accessible and very articulate.” (Legal 500, 2022)

“He is very personable and gets to the issues quickly.” (Chambers & Partners, 2022)

“Matthew is astute, quick to respond and able to deal with the fundamental issues directly, concisely and persuasively.” (Legal 500, 2021)

Matthew’s litigation practice involves regular appearances in the High Court (TCC and Commercial Court) and in the Court of Appeal. Recent notable cases include:

In addition to his arbitration work as counsel, Matthew has recently acted as Tribunal Secretary in a $2bn ICC international arbitration arising out of a commercial contract in the Middle East.

Matthew is a contributor to the most recent editions of both Keating on Construction Contracts and Keating on JCT. He has completed the Keble Advanced International Advocacy Course at Oxford University. He is a recent winner of both the Jane Lemon Essay Prize and the Jonathan Brock Memorial Essay Prize.

Through his considerable experience of resolving commercial disputes of the types described above, Matthew is adept at handling all commercial disputes that require both specific industry awareness and an in-depth knowledge of the law of contract, tort and restitution. In each of the cases he is instructed upon, Matthew combines incisive legal analysis of the issues involved with a pragmatic approach to dispute resolution, which takes account of the commercial reality of the parties’ relationship and the client’s particular objectives.

Amongst other matters, Matthew has also recently advised in relation to:

Amongst other matters, Matthew has also recently advised clients in relation to:

Matthew has recently been instructed in a series of PFI disputes. Of those, the largest had a contract value of over £4bn and the dispute value to the local authority was over £250m. That case was principally concerned with the local authority’s right to terminate the contract for Contractor Default. In the course of the dispute, issues included (but were not limited to):

In addition, Matthew has recently advised the potential Defendant, as sole Counsel, in respect of a threatened multi-million-pound dispute concerning the proposed termination of a PFI contract in the North of England.

As set out above, in recent years, Matthew has been heavily involved in a series of high-value disputes concerning the termination of commercial agreements. Those disputes span a wide variety of industry sectors and are principally concerned with the validity and financial consequences of purported (or threatened) terminations. Recent examples include: