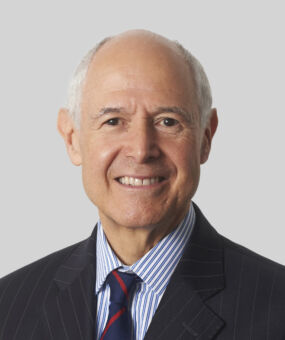 Dr Robert Gaitskell QC practises from Keating Chambers,  specialising in technology, engineering and construction disputes, often of an international nature. He was called to the Bar in 1978, appointed Queen’s Counsel in 1994 and sat as a Recorder (part-time judge) from 2000 – 2010. Robert Gaitskell predominantly acts as an arbitrator, adjudicator, dispute board member and mediator. He is both a lawyer and a professional engineer. He is the editor of ‘Keating Construction Dispute Resolution Handbook’ (3rd edition 2016); and a former Vice President of the IEE/ IET (Europe’s biggest professional engineering institution). He is a member of the Singapore National Electricity Market Dispute Resolution & Compensation Panel. Dr Gaitskell is the chairman of a dispute board for a Euro 20 billion nuclear energy project. He writes extensively and lectures throughout the world on legal/engineering subjects, including at CERN in Geneva and  Xerox PARC in Silicon valley.

Dr Gaitskell is currently acting as chairman or member of various ICC, LCIA, UNCITRAL, SIAC, ACICA, AICA/KLRCA, EDF, DIAC, ICDR/AAA, Dubai RTA and other arbitral tribunals, dealing with matters such as oil and gas installations and pipelines, power stations, oil and gas plants, petro-chemical works, and other complex and high-value engineering and process projects. As examples, he is the chair of an arbitral tribunal dealing with a major LNG project in Australia, a member of the tribunal for a dispute concerning a Central American shipping canal, a dispute board chair in respect of a major African power project, a tribunal member for a Dubai construction dispute, and for a Korean infrastructure arbitration, and for a Qatari utilities dispute. He is the sole arbitrator for a major railway dispute. He was the expert determinator for an Omani power station. He has recently mediated a Singaporean hi-tech dispute and chaired a tribunal dealing with energy pricing in S.E. Asia. He has also advised on a dispute concerning a Russian floating nuclear power facility. He was recently a co-arbitrator on an ICC panel dealing with a dispute concerning a sub-sea gas pipeline bringing energy supplies from Russia to Europe. He is also conducting an African mining arbitration and chairing a dispute panel dealing with defence projects in the UK. He has recently advised the Corporation of London on a major structural project and represented the Isle of Man Government in the Privy Council in an infrastructure project.

In addition to his practice at the Bar, Robert Gaitskell is a Chartered Engineer and Fellow of the Institution of Engineering and Technology and is a former Senator of the Engineering Council. He is also a Fellow of the Institution of Mechanical Engineers and a Fellow of the Chartered Institute of Arbitrators. Robert Gaitskell’s wide experience as an engineer, both in the UK and abroad, has included power generation, transmission, distribution and application, motor control and oil rig design.

Robert Gaitskell has lectured on the University of London (King’s College and Queen Mary’s) LLMs in International Arbitration, dealing with Infrastructure arbitrations. Chambers & Partners’ directory consistently recommends him as a leading international arbitrator.

He also regularly carries out expert determinations involving complex engineering disputes. He is Chairman of the IET/IMechE Joint Committee on Model Forms, which produces the MF/1-4 suite of contracts used for major electro-mechanical projects worldwide. His doctorate from King’s College London concerned standard form engineering contracts. He is a Bencher of Gray’s Inn and a former member of the Council of the Inns of Court (COIC) Tribunals Appointment Body. Robert has recently been appointed to the panel of mediators for the Japan International Mediation Centre in Kyoto (JIMC-Kyoto).

Dr. Gaitskell is the chairman of the European ITER nuclear fusion project Dispute Board. He is an experienced Dispute Board (DB) Chairman who lectures and writes upon the process. Robert Gaitskell gave an International Chamber of Commerce (ICC) Lecture on Dispute Boards at the launch of the ICC’s DB Rules, and recently gave an ICC lecture on Dispute Boards. A paper by him on the subject is available on the Society of Construction Law website. He recently lectured at the Chartered Institute of Arbitrators on DBs.

Robert Gaitskell is also the Editor of the Keating Construction Dispute Resolution Handbook (3rd edition 2016), in which he deals with the DB procedure in international disputes.

His current and recent DRB appointments include:

Robert Gaitskell has carried out over100 mediations in the commercial, construction, engineering and intellectual property sectors; many abroad including Hong Kong, Taiwan, Singapore and South Africa. He is one of the Bar Council’s recommended experienced mediators at the Bar. He is recommended by ‘The Legal 500’ as a leading mediator. He has recently lectured in Singapore and at the IBA Vienna conference (2015) on oil and gas mediations.

Recent appointments (drawing on Dr. Gaitskell’s status as a Chartered Engineer) concern a Zambian mine plant and a Middle East power station.